If you put in the hours at work, you deserve to get paid for them. Each and every one of them.

Employers have an obligation to pay their employees the wages they have earned at reasonable intervals, and they should prioritize this duty above all else. When they don’t, they face serious repercussions under employment law—assuming the worker who has been shortchanged knows how to hold management accountable.

If your paychecks are often for less than they should be—or they’ve been missing altogether—here is how you should proceed.

How Do I Know If I’ve Been Paid All I’m Due?

Is your employer paying you every dime you were promised?

At The Law Offices of S. David Worhatch, I examine each element of your compensation to make sure you received every bit of what you earned.

First, we will want to understand exactly how much you were supposed to be paid and how often.

In Ohio, by statute, employers must pay you not less than monthly and cannot hold your final paycheck after your last day of work for more than 30 days. Employers who do not meet these standards are subjected to “liquidated damages” of six percent (6%) for each paycheck no remitted on time, or $200.00, whichever is greater.

Second, are you salaried when you should have been hourly?

Many clients come to my office and discover that they were misclassified by their employers as “exempt” (salaried) when they should have been properly classified as “non-exempt” (hourly). The difference determines whether you are entitled to overtime compensation at 150 percent (150%) of your base hourly compensation rate (also known as “time-and-a-half”) for each “overtime” hour worked. At The Law Offices of S. David Worhatch, we analyze your circumstances to determine whether you were properly classified and whether you received every penny earned for all of the “overtime” you worked. Federal and state law allows you to recover twice the amount of your unpaid “overtime” wages, plus attorney fee reimbursement, for two or three years of unpaid compensation.

Third, has your employer paid you the “minimum wage” to which you are entitled by law?

Fourth, did your employer neglect reimbursing you for all employment-related expenses you advanced or did you not receive all of the perquisites (“perks”) of the job to which you were entitled? Has your employer agreed to cover your tuition for college credit or a job-related seminar without reimbursing you? What about mileage for the business use of your vehicle? Did your employer fail to cover all of your relocation expenses, as promised? Did you lose personal property or have it damaged at work when your employer’s insurance company fails to cover the loss and your employer fails to make good on any deductible so you can be made whole?

Reimbursement of expenses is part of the compensation to which you are entitled and you should think carefully before letting your employer get away with not honoring its obligations to you.

Fifth, did your employer forget or decline to pay you all of the commission income you earned?

This is one of the most fertile areas for compensation disputes. Management often claims the right unilaterally to declare one of your best customers to be a “house account” for which you will not receive any commission income on future sales. In other cases, management will “realign” or “reassign” some of your best accounts without your consent. In yet other instances, management will redraw territories against your will and in ways that will foreclose you from reaping the benefits of all of the groundwork you laid in booking sales with your key accounts. The extent to which management can get away with these tactics will be determined by the terms of the company’s commission plan and the promises made at the time you agreed to sign on with the company. At The Law Offices of S. David Worhatch, I delve into commission arrangements to make sure management is precluded from unilaterally denying you all commission income to which you are entitled … and I show you how to negotiate and craft commission plan language to protect your interests (or I will negotiate commission terms on your behalf).

Sixth, do you believe your employer was not fair to you when it came to enrolling you in its bonus or incentive compensation plan or awarding compensation under it?

One of the most significant employment-related cases litigated at The Law Offices of S. David Worhatch involved an employer who thought its plan, as written, allowed it not only to make after-the-fact decision, in its “discretion,” to reduce the amount of bonus earned by its top-producing sales representative for the year, but also to give some of what that representative earned to other who did not do as well or to take the excess back into the company’s account to improve the “bottom line” and executive management’s eligibility for bonus compensation under a different incentive compensation plan. A federal court ordered that company not only to pay every dime earned, but also to reimburse the employee every penny spent on attorney fees and expenses to enforce her rights to her bonus.

Many bonus or incentive compensation plans are “discretionary,” to be sure, and management in those cases reserves broad rights to decide how to allocate bonus or incentive compensation as long as they don’t discriminate in making those decisions on the basis of race, color, creed, national origin, gender (sex), religion, disability status, age, genetics, or military status.

Even so, there are a great number of bonus or incentive compensation plans that establish, in whole or in part, “objective” standards for making awards that convert what otherwise would be an act within the “discretion” of management into a bona fide claim for unpaid earned compensation.

To win an employment law dispute, you will need sufficient evidence of the company’s wrongdoing. Therefore, the first step to building a strong claim is gathering critical documents. This might include time cards, calendars, paystubs, invoice statements, offer letters, company policies or procedures, exchanges of correspondence and e-mails, and prior tax returns. Once you have obtained such documents, review them closely to ensure that your paychecks have actually been incorrect. At The Law Offices of S. David Worhatch, I can help you identify the types of documents I would need to make a case for unpaid or underpaid compensation.

At the end of the day, those who process payroll are human like everyone else. In other words, they can and do make mistakes. Therefore, it’s wise to reach out to the human resources department first if your paycheck is incorrect or missing. If it turns out the discrepancy was merely an error, the company should make it right by the next pay period. If, on the other hand, it was not just a mistake, the next step is to consider filing an employment law claim.

Employees who have been shorted on their paychecks may file a confidential complaint with the Wage and Hour Division of the Department of Labor. This division is responsible for enforcing the statutes set forth in the Fair Labor Standards Act. It may also be helpful to reach out to the Ohio Department of Commerce, Division of Industrial Compliance, Wage and Hour Bureau.

However, and this cannot be understated, neither government agency represents you in the process. Each represents the government. That means that when it comes to deciding how to investigate a claim or whether to take a case to trial, or to settle it, or to drop it altogether, such decisions are made by government lawyers on behalf of their government clients … same as when the Equal Employment Opportunity Commission or the Ohio Civil Rights Commission takes on a case based on a charge of discrimination filed by an individual employee. At The Law Offices of S. David Worhatch, I frequently hear from prospective clients dissatisfied with the way the government is investigating, handling, prosecuting, or settling a case and wind up seeing first-hand what can happen when control of the case is handed over to a government attorney and a bureaucrat who has to work with limited resources allocated by Washington or Columbus to address the needs of thousands of complainants.

The “bottom line” is that while it is possible that we, too, will conclude that letting the government take the lead, at least in the early going, would be in your best interests, only by engaging the services of a qualified, experienced employee rights advocate can you be assured that the lawyer working on your case is looking after your interests and not merely the interests of the taxpayers.

Class Actions: Are You Part of a Bigger Problem?

A “class action” is a case brought by one or more claimants against a defendant for having committed the same offense against each member of the class. Such actions are not uncommon when it comes to wage-and-hour disputes and other compensation-related issues. The representatives of the class are entitled to additional compensation for the services they render in bringing the case, hiring the lawyer and working with counsel to prosecute the claims, attending depositions and hearings, testifying at trial, and helping to guide the attorney in making critical decisions along the way. In one recent case, an employer failed to pay its employees for the time it took for them to change into and out of clothes that the employer required them to wear before entering sanitized sections of the building housing the company’s operations. The case was brought by a handful of employees on behalf of all of their hundreds of co-workers and the outcome was that the employer not only had to change its practice and begin paying each employee for the 20 minutes needed each time he or she changed into or out of the specialty clothes, but also had to remit back wages for the previous two years, including “overtime” wages for those employees who earned it when the extra 40 minutes in a day took them over the 40-hours-a-week threshold. No federal or state agency can prosecute a class action on your behalf where you will remain in charge of your case. Only your private attorney can.

Learn more about Compensations and Wages 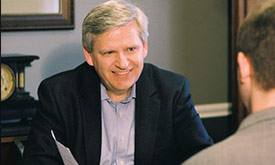 If you want to investigate or file a wage or compensation claim in Ohio, turn to The Law Offices of S. David Worhatch in Summit County. I have nearly 40 years of experience in the practice of law and offers a broad range of services. In addition to employment law disputes, for example, I assists clients with wills and trusts, business succession planning, and real estate transactions. I work with my clients, instead of merely for them, I empowers them to protect their family’s financial security in the years to come. I am proud to claim many five-star Google ratings. To get in touch with me, call (330) 656-2300 or fill out the form on my website.

Have a question? Ask it.

S. David Worhatch aims to protect your future through solid legal planning. If you need an employment attorney, or the services of an estate planning lawyer, contact him directly by phone or fill out the form below.